Mama is finally letting me use the computer to update everyone! It's about time, but I have to admit that we have all been very busy! For one thing, Mama whelped a hairless puppy on December 27...wait, she says she "gave birth" to a "baby". Okay, whatever...anyway, it is a girl-pup, and she and Dad named it Siobhan. Dad calls her Chevy for short. The baby keeps us all on our paws. We've all been helping Mama with her. I decided that as I am the biggest dog in the house, it's my responsibility to guard her from everything. I even sleep under her cradle, or between the cradle and Mama, since it's my job to guard her too.

I don't remember if I mentioned it before, but Mama had to rehome Lita, which she did a long time ago, but I don't think I got on here and said anything, since Mama has been so bad about letting me have computer time. Lita just kept starting fights with my Lab sisters, and the last one almost got the older human sister bitten. Mama still misses Lita, but LeeLee needed to be in a family where she would be the only dog.

That being said, on February 13 of this year, we added another dog to the pack! This one is a male, but he is only a pup and so submissive that I let him live here. His name is Malayko and he's about 4 or 5 months old. The older biped sister named him. Lots of humans who don't want their dogs drive all the way out to our area and just dump them out of the car and drive away. Can you imagine such a horrible thing as having someone you love do that to you?! So the Labbies and I, we know how lucky we are. Our neighbors have a dog named Chupacabra who was dumped, and Malayko was dumped too. He's a German Shepherd mix, and I think he's mixed with a little bit of Sibe! He's very cute, Mama says, although he will never be as cute as I am - that's just impossible!

And, I'm six years old now! Yes, Mama forgot to let me post another birthday, but she didn't forget to feed us extra special food on our birthday! So I'm not too mad at her - I did get raw chicken leg quarters for my dinner on my special day, and also on my gotcha day! I've been here for three years now! And you know what? Mama and Dad still love me! I guess I shouldn't be surprised by that; they've had my Lab sisters with them for almost seven years now - their whole lives! So we're some lucky dogs, huh?

Hopefully, it won't take so long before Mama lets me on the computer again! The newest biped sister seems to be settling into the pack better now, so maybe Mama will have more time again soon! Until then, don't give up on me! I will be back!

So, I am finally here to post a happy belated birthday to my Lab sisters, Smoky and Bandit, who turned six years old on 8/29/09! Smoky remains her dark chocolate self, but Bandit has begun to show her age in the grey hairs appearing on her chin. That's the only place, though: she is still our hyper, playful, puppy-brained sister!

In the interest of fairness and smoothing over any hurt feelings, I call on Mama to make reparation to us all for forgetting the girls' birthday by giving us extra livergreat tonight, and allowing us all to sleep wherever we like on the bed, no matter how uncomfortable it makes the humans! And, if Bandit wishes, she should be allowed to sleep in the little biped's room tonight, even if she keeps the little biped up playing all night. This point, however, is negotiable, although the rest are not!! A lesson must be taught, here!

PLEASE BE ON THE LOOKOUT!!

Yes, every so often there is something more important to post about than me, and this is one of those times.

Laska is a rescue pup, like me, and he is heartworm positive and needs medication for it. Mama has received a flyer about him, so I will post it here:

"Laska has been missing since June 21st. Last seen near Lakeshore Drive in Hewitt, NJ. Laska is very fearful and may run away if you try to approach him. If you see him, please call 1-862-881-0568 immediately. Thank you."

Here is a picture of Laska: 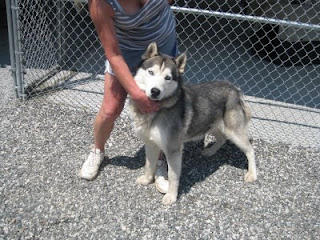 I couldn't get the other picture of him to work, but I will continue to try. Please, if you know people in this area, have them keep a lookout for him. Even if you don't, crosspost this to as many places as you can and get your prayers out there. Laska was thisclose to being PTS when he was rescued from North Carolina. He has come so far since then; we can't let it end for him now!

Mama couldn't keep from telling everyone, so I am now free to reveal the secret I had sworn to keep: Mama is going to whelp and have puppies!

Wait, Mama has corrected me. In humans it's giving birth and having babies. She further corrects that it isn't "babies", it's "baby". Don't humans have more than one at a time, like dogs do? I'll have to research that.

So, she will be spending a lot of time at the doctor's office over the next nine months. Wow, nine months! It only takes us dogs about 65 days! Humans really are weird, taking so long to have one furless puppy, when it only takes us two months to have several! I don't get it. But, anyway, I'm not sure how I feel about the new pup yet. Smoky and Bandit are happy about it, but they told me the pup won't be giving us bonus food for months, and that the pup pretty much only sleeps and eats just like a regular pup, except it can't even crawl right away! So I'm gonna reserve judgment till after I meet this new pup!