Thor here. Mama and the little biped went on their own adventure today, and they didn't take us along! But it's okay, because I don't think any of us really wanted to go on this one. They went to a ranch called Cowtown Keeylocko. It's a working cowtown, owned and built by one of the few African-American cowboys in the area. Ed Keeylocko's got chickens and pigs wandering around loose, and horses and cows and bulls. It's a real Old West type of cowtown. It even has a jail, and the rumor mill has it that on occasion, overly rowdy Border Patrol officers have been put in it! We didn't want to go along becaus 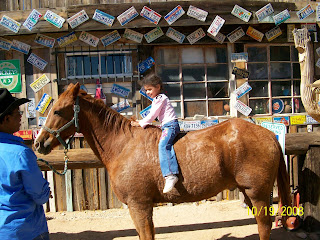 e we heard that a whole bunch of pigs can be kind of mean. I don't know how true that is, but I can say I didn't want to find out! Individually, though, I think I'd like to make the acquaintance of a pig...bacon and ham and sausage are really tasty! So is cow, but these cows haven't gone to the factory yet, so they're a lot bigger than I am, and Mama says they have REALLY sharp horns!

But the little biped had lots of fun! For awhile today, she was the only child on the ranch, and the cowboys all spoiled her! One of the cowboys, RJ, even let her ride a horse! A BIG horse too, not one of the little ones! I am very proud of her. Mama showed us the video, and the midget wasn't the least bit scared, probably because she's used to big d 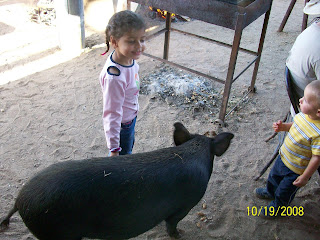 ogs like us, and she feels that horses are just really big dogs! They're not, of course, but she's three, so why argue?
She also made another friend--this is the one we wanted to meet! Doesn't he look tasty? Just think of all the ham, sausage, bacon, spareribs, roast, and pork chops we could get out of him! Yummy! Only two problems with that, though. For one thing, Mama says they smell really bad, which doesn't bother us, but I guess she doesn't like it, and since she's the chief cook in our house, when it comes to food, her word is the law. The other problem is that Dad is Jewish as well as Italian, and isn't supposed to eat pork. Hmmm. Dad does eat sausage and bacon when Mama cooks the big breakfast on Sunday mornings, so I think he plays that card when it's something he doesn't like. I'm just sayin'.
Mama was kind enough, though, to bring us back treats from Keeylocko! They had cooked a brisket, and Mama brought it back for us! Mmmmm, so tender and juicy and delicious! Mama didn't like it much and said it was a heart attack waiting to happen, and she also said not to expect such treats all the time because she loves us and wants us to live a long time. Huh. If she loves us so much, we should be getting treats like this all the time, don't you think? I think so, and I'm pretty sure my sisters would agree! I think if LeeLee becomes the Queen of the West, the first law she should pass is one making brisket a required treat! Ha roo!!!
Here's the video Mama made of the little biped on her first ride! Have I mentioned that I'm proud of her being so fearless? Her bravery is entirely due to us dogs!
Enjoy!
Woos,
Thor
Pawed by Thor at 9:48 PM

Too bad you didn't get to go! Horses are very interesting.

Wow - your little biped had quite the adventure, Horses, Pigs! We think it was great that you guys stayed at home and took care of the house while they were gone!

Hi Thor! That "pig" might have been a fat dog. That smelled bad (to your mom). She shoulda brought it back to see if it would play nice with you guys!

I have no clue why my Mom is laughing. She's muttering something that sounds like "Beware! That's how it starts!". Whatevvvver. I'm just interested in that bacon....I mean piggy.
ECHO